Its that time of the year again.  That time when you fill your coffee cup with eggnog lattes and sit by the fire.  Unfortunately I don’t eat eggs anymore.  So I haven’t had eggnog lattes in a while. 😦 I decided to see if there was a recipe that I could make without eggs.  I found one on Pinterest and decided to modify it a little.

What you need  is milk, nutmeg, cinnamon, vanilla and  the secret ingredient instant vanilla pudding. 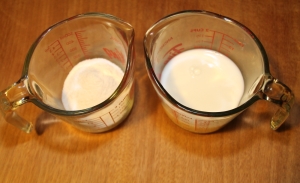 It will thicken really quickly.

In a blender mix together all the ingredients.

Blend well and allow to sit. The eggnog will be thick.  You can add more milk to thin it out, or just add it to coffee. YUM!

It is strange that this does taste like eggnog.  I wouldn’t say it is the best but dang it is easy! Happy Holidays!

Mix 1 cup of milk with the vanilla pudding and allow to set.  In a blender, blend all the ingredients together.  You can add more milk if it is too thick or you can add it to coffee.  Enjoy.

Check out our other recipes on our blog!