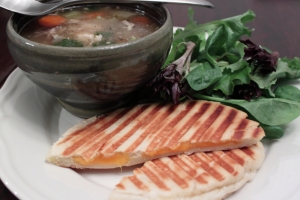 Being creative in the kitchen sometimes involves using those leftovers in the fridge. Yes! If you have leftovers you have to eat it later because you did not eat it then. Like my dad always says “eat it now or eat it later”.

After looking at all the leftovers in the fridge and freezer, I decided to make grilled cheese sandwiches with leftover pita, cheese I had in the freezer and leftover chicken bone soup. I also had some carrots, onions and celery left over from something else. (They were getting a bit wilted.) 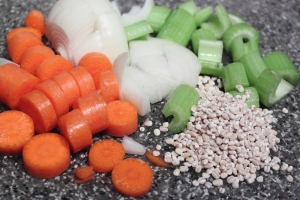 After Thanksgiving and Christmas, we had leftover chicken bones. I couldn’t let that go to waste so I kept them in the freezer till I was able to use them for soup, stock or congee. I decided to use it for the chicken soup.

I added the chicken bones, carrots, celery and onions to a slow cooker. I also added barley and chicken broth (no salt!).

The nice thing about the bones is the flavour from all the spices and the flavour it has from roasting. I added a couple bay leaves to the broth to add some extra flavour. 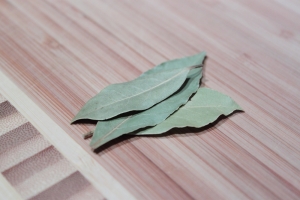 The nice thing about slow cookers is that they cook at an even temperature and you can leave it without worrying about burning. I cooked the soup for about 6 hours. 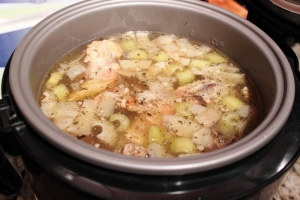 After 6 hours, taste the soup. You may have to season it. I had leftover soy sauce (from sushi) in the fridge so I used that. 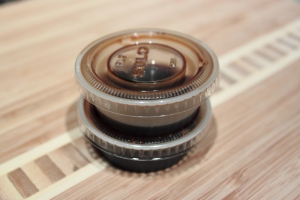 To add more chicken goodness, I got some skinless chicken breast and brined them. Slice them into strips and cook in the soup close to when you want to serve it. This way the chicken does not over cook. 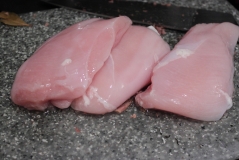 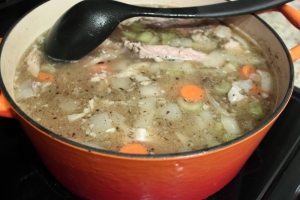 To make this a soup and sandwich dinner, I wanted to use the leftover pita bread and cheese that I had in the freezer. I used these to make grilled cheese sandwiches. 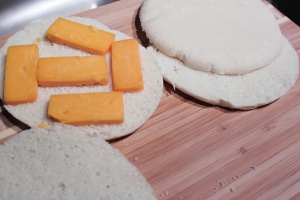 I have to say… this was a great dinner despite all the leftover food I used. You know the saying “eat it now or eat it later”. Well its sometimes better to eat it later. 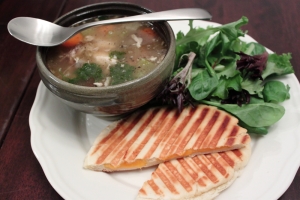 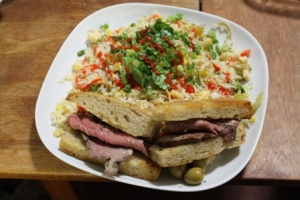