During my trip to Alaska, I found this recipe book. It had lots of different recipes using sour dough. There was cakes, breads and even cinnamon buns. I wanted to see if sourdough cinnamon buns were better than regular cinnamon buns so I decided to try out both recipes. The sour dough cinnamon bun recipe comes from Simply Sourdough: The Alaskan Way by Kathy Doogan.

After leaving the starter to rest overnight, you want to mix it with the 2 eggs, 1/4 vegetable oil and 1/4 cup packed brown sugar. 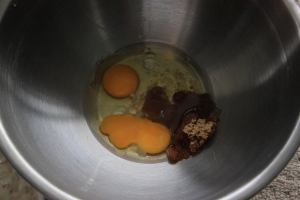 I like using my cutting board. A tip is to stick a damp cloth under the cutting board to prevent it from slipping. 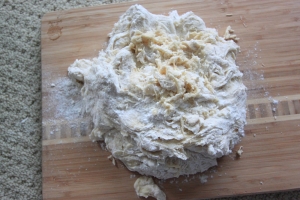 After a couple of minutes of kneading, the dough would have formed gluten or the stuff that makes the dough nice and elastic. You can see that it has also turned very smooth and when you poke a finger on the surface, you the dough springs back. 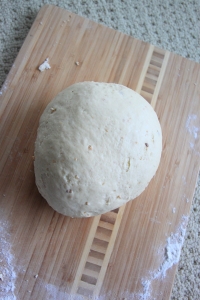 Rest the dough for about 10 minutes before you roll it out. Roll out the dough into a long rectangle. The thinner you roll the dough the more crispy the cinnamon bun. You’ll be surprised at how much it grows as it rests and bakes. 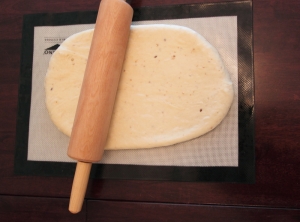 To assemble your cinnamon buns, brush the dough with some melted butter and sprinkle with the cinnamon, brown sugar mix.

Make sure you have a lot more than you think. As the dough bakes, there will be more dough and less gooey filling so you want to make sure to put more of the sugar. After you have spread the sugar mixture over the entire dough, carefully roll it as tightly as you can. Then its time to cut the roll. Prepare a baking tray by spreading a generous layer of butter over the surface. Cut the roll into 1 1/2 inch pieces and place it carefully onto the tray as carefully as possible. 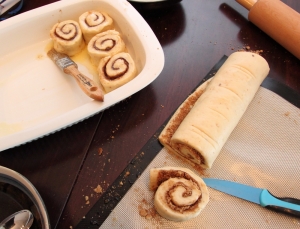 The rolls should be tightly packed. Once everything is nicely lined in the baking tray, generously brush the tops of the cinnamon buns with more butter. Leave the rolls for another hour or so until the buns have doubled in size. 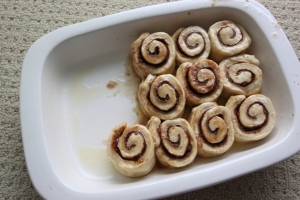 To start this cinnamon bun, mix a package of yeast with the water and sugar. Let it rise for about 10 minutes. In a bowl combine the one egg, 1/2 scalded milk, 1/3 cup melted butter and teaspoon of salt.

Slowly add the 4 cups of flour. Depending on the weather and how much water is in the flour, add the flour until the you make a dough ball that is not too wet or dry. Knead the dough for 5 to 10 minutes and then cover it with a damp tea towel to let it rest for about 1 1/2 hours or until it has doubled in size.

Once the dough has risen. Prepare the dough as you did previously by rolling it out and covering it with the cinnamon and sugar mixture. Cover these with melted butter and let it rise for 45 minutes. 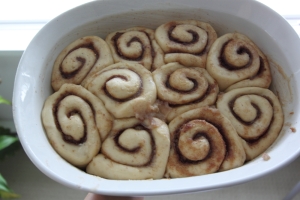 Preheat the oven to 350 degrees F and when the oven is ready, bake the cinnamon buns for 30-40 minutes or until it is nicely browned. In the meantime, make the a glaze. Instead of making cream cheese icing, I decided to go traditional and make the sugar glaze.

To make the glaze, mix 4 Tbsp of melted butter with 2 cups powdered sugar and 1 tsp vanilla extract. Add 1 Tbsp of hot water to this and continue to add until you get a nice glaze that is runny enough to pour over the cinnamon buns. Double the recipe for the two batches!!

Pour the sugar glaze over the slightly warm cinnamon buns. Ta Da!! Delicious cinnamon buns! I still haven’t decided which ones I liked best. What do you think?? 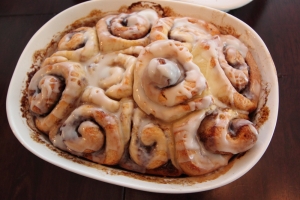 In a small bowl, dissolve yeast in warm water and set aside. In a large bowl mix milk, sugar, melted butter, salt and egg. Add 2 cups of flour and mix until smooth. Add yeast mixture. Mix in remaining flour until dough is easy to handle. Knead dough on lightly floured surface for 5 to 10 minutes. Place in well-greased bowl, cover and let rise until doubled in size, usually 1 to 1 1/2 hours.

When doubled in size, punch down dough. Roll out on a floured surface into a 15 by 9-inch rectangle. Spread melted butter all over dough. Mix sugar and cinnamon and sprinkle over buttered dough. Sprinkle with walnuts, pecans, or raisins if desired. Beginning at the 15-inch side, role up dough and pinch edge together to seal. Cut into 12 to 15 slices.

Coat the bottom of baking pan with butter and sprinkle with sugar. Place cinnamon roll slices close together in the pan and let rise until dough is doubled, about 45 minutes. Bake for about 30 minutes or until nicely browned.