While I was surfing through the internet I stumbled across Kombucha.  I was really interested in this because I love growing strange things and the Kombucha scoby looked so gross. You will see it later on.  As I researched on how to make Kombucha I found out about how healthy its for you.  I started looking for Kombucha drinks so that I could start growing my own culture but I found it very difficult as I did not know where to look.  I did find a bottle at Whole Foods and bought it.  Later I found some bottles at IGA but they were flavored ones so I was glad I bought the one from Whole Foods.  I am in the process of growing my own Kombucha scoby so I do not know how it will affect my health.  When I tried the Kombucha I bought it was very sour and tasted almost like apple cider vinegar.  Later on I will update you on how I feel after drinking Kombucha.

Growing your own Kombucha Scoby

Scoby means symbiotic culture of bacteria and yeast.  Here is where my interest in growing gross things comes into play.  Kombucha is a fermented tea made using a scoby. The scoby bacteria colony eats up the sugars and caffeine in the tea and make good bacteria (probiotics) and acetic acids. Its supposed to help with your digestion and so on and so on.  I looked on the internet to find a way to make my own scoby. The information that I used was from the websites:

But there are many other websites out there that you can use.  If you are interested in looking at health benefits of Kombucha search the web! I am new at Kombucha so I do not know very much. Right now it is like a science experiment!

It started December 29 when I first bought a bottle of Kombucha.  I bought the brand KefiActive Kombucha from Whole foods, a 250ml bottle.

To prepare for the scoby I bought a glass jar.  Use only glass as the liquid is very detoxing and can leach toxins from the plastic.  Boil 1 L distilled water, 1 large chunk of rock sugar, 3 black tea Murchies bags (English breakfast).

Don’t use earl grey or herbal teas as the oils from the tea can damage the Kombucha colony.  I steeped the tea for 10 min and cooled it to room temp.

Meanwhile warm up Kombucha to room temp.  Most Kombucha that you will find will be in the refrigerator section of stores as it slows down the fermentation process.  Place the tea in sterilized bottle.  (I washed and rinsed the glass bottle and then placed it in the oven at 200 for about 15 min… similar to jarring jam) cover with a cloth and elastic and place in a spot that wont be disturbed and cannot absorb bad toxins from the air.  Cool the tea until room temperature as the Kombucha bacteria is sensitive to heat.  When the tea is cool add the entire bottle of Kombucha.   If you look carefully a that the top of the liquid there is floaties on the surface. This is from the Kombucha drink and they are little Scobies. This is how you know that the Kombucha is alive. I made sure I bought a Kombucha that said raw and not pasterized.

I put mine upstairs on a bookshelf.   Make sure that the temperature is between 70 degrees and 80 degrees for optimal growth.  If it is too cold or if you do not have enough Kombucha then mold will form.  The Kombucha helps to make the liquid acidic as mold does not like acidic liquids.  Since Kombucha is a living organism it helps if you send the Kombucha good vibes as it is a living creature.  Say nice things about it and talk to it every day! I’ve named my scoby “Scoby”!

Day 2 of Kombucha- I thought nothing was happening.  I was worried about mold forming because I put a lot of sugar in the liquid and I didn’t put enough Kombucha liquid to change the ph

Day 3:  I started seeing small dots on the surface of the liquid and thought it might be mold.  But I read a few websites saying that mold is fuzzy and sometimes scobies start growing as small dots.

Day 4:  The white dots are getting bigger. I was so excited. Its like watching plants grow!

Jan 3: Day 5- the white spots are still getting bigger! 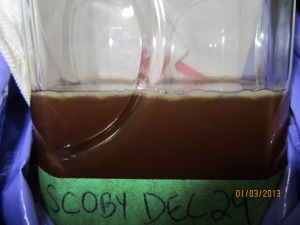 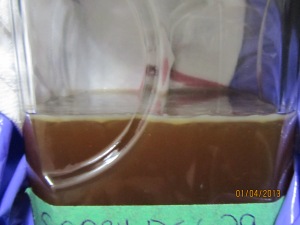 Here’s what the Scoby looks on day 7.  I will update you when my scoby is fully grown!  to be continued…. 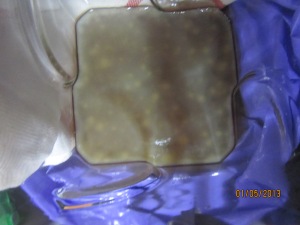 Awesome video of how to use a scoby
http://www.ted.com/talks/suzanne_lee_grow_your_own_clothes.html