Have you ever wanted a fun way for people to eat food?? Try monkey bread!! Parties and gatherings won’t be the same with this. People can grab a piece and go. 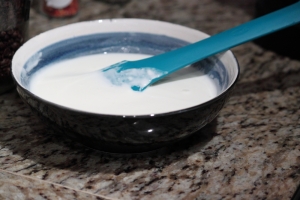 In a sauce pan, put 1 1/2 cup brown sugar and 3/4 cup butter. Heat the butter until it becomes a nice brown sauce. Turn off the heat and set aside until ready to use. In a separate bowl, mix 1/2 brown sugar and cinnamon.

In a mixing bowl, mix the dry ingredients together (4 cups flour, baking soda, baking powder and salt). Add 3/4 cup softened butter to the flour and cut it with two knives or a pastry cutter. This will create little chunks of butter. Add the buttermilk and mix all the ingredients until it becomes a dough.

In a preheated oven (350 degrees) bake the monkey bread for 30-40 minutes. When the monkey bread is done take it out of the oven and let it cool in the pan for 10-15 minutes. This will allow the bread to cool and set in place. 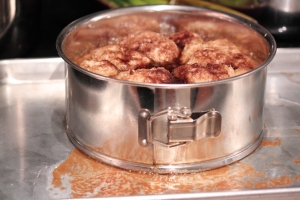 The monkey bread hold the shape of the pan and reveal the nicely browned sugar syrup the formed at the bottom. (Its similar to upside pineapple cake!) To make it extra special, I added some sugar icing.  Serve it warm! Yum! 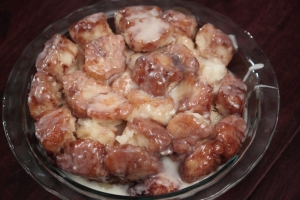