Begin by melting the coconut oil. This will help it blend into the cracker dough. 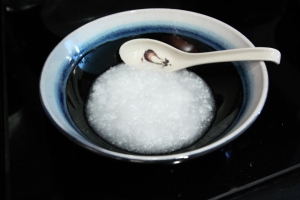 Mix the sourdough starter and oil together until well combined. If the starter is cold, the coconut oil will solidify so try letting the starter sit until it has become room temperature. 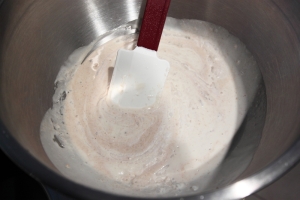 Add 1 cup of flour slowly to the mixture until it becomes a stiff dough ball. 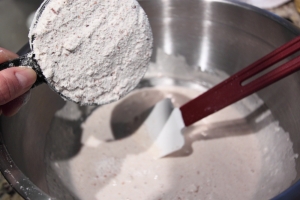 Cover the dough with plastic wrap and let it rest at room temperature for about 7 hours. 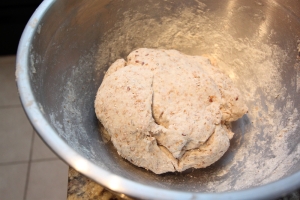 After letting the dough rest, roll out the dough as flat as possible. The dough does rise a bit so try to get it thin.  The dough might be a bit springy so try as best as you can to roll it out.

Cut the dough using a knife or pizza cutter. 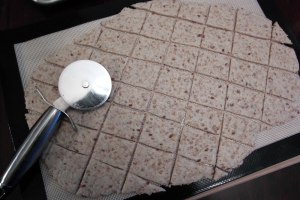 Brush the dough with oil and sprinkle with course salt.

Bake the crackers in 350 degree oven until it is brown and dry. It took me about 40 minutes for my crackers to be ready. Let the crackers cool before storing them. They are delicious with Nutella or peanut butter!! 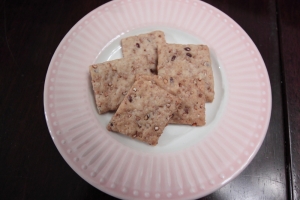 1 cup “discarded” sourdough starter
1/4 cup room temperature lard from pastured pork (or coconut oil or softened butter)
1 cup whole wheat or spelt flour, or as much as you need to make a stiff dough
1/2 tsp sea salt
Olive oil for brushing
Coarse salt (such as kosher salt) for sprinkling on top

In a large bowl, combine the sourdough and the lard and mix thoroughly. Mix the salt in with 1/4 cup flour and add to the sourdough mixture. Knead it all together in the bowl, adding as much flour as necessary to make a stiff dough. Cover the dough with plastic wrap or put a lid on the bowl to prevent it from drying out. Leave the dough at room temperature for at least seven hours.

Take a small portion of the dough (about 1/4 cup) and roll it out on a Silpat or other nonstick baking mat using a rolling pin, until it is very thin.

Pour a little bit of olive oil on the rolled out dough and spread it to the edges of the dough with a pastry brush or your hand.  Sprinkle liberally with coarse salt.  (I tried these with fine sea salt and it really wasn’t as good as the kosher salt!)