This is not an easy recipe. Turn back while you still can. It takes a lot of work and time but the results are awesome. 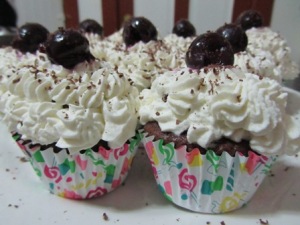 Begin by preparing your ingredients.   You will need to make moistening syrup to mix with your liquor.  Combine 3/4 cup water and 3/4 sugar in a sauce pan.  Heat until the sugar has dissolved.  Set this liquid aside. 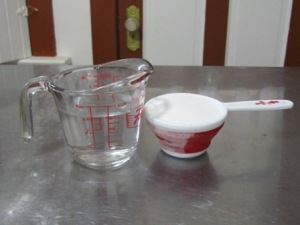 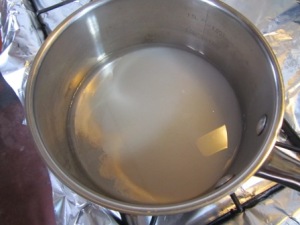 To make this recipe extra special, we made clarified butter.  This is different than ghee as you do not heat the butter until the milk solids brown.   Clarified butter is wonderful as it makes the shelf life of butter much longer and increases the smoke point.  Cut the butter into small pieces and allow to melt on low heat.  Do not stir.  Turn off heat when melted. 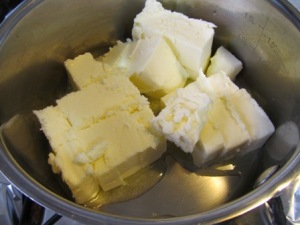 With a spoon, skim off the foam. 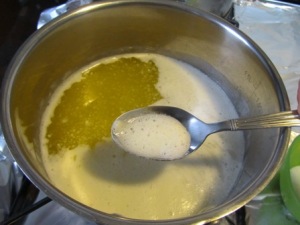 Allow the melted butter to sit and milk solids settle.  Carefully pour into a heatproof dish. 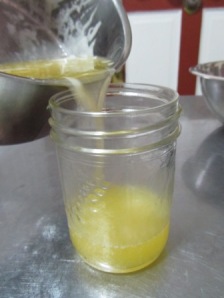 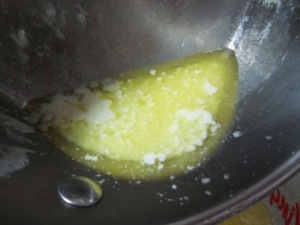 Whenever you are using cocoa powder it is very important to sift it before mixing in the wet ingredients.  The cocoa tends to get lumpy and sifting it helps the dough get nice and fluffy.

In a heat proof bowl whisk together the 6 eggs and 3/4 cup sugar.

Set the bowl in a skillet of barely simmering water (or double boiler).  Whisk until the mixture is about 110 degrees F. 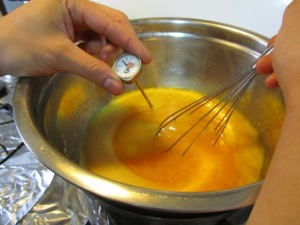 Beat until the mixture has tripled in size.

In 3 additions, sift in the flour and cocoa mixture and fold into the egg mixture gently. 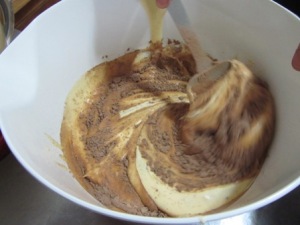 Scrape the batter into greased pans and bake for about 30 minutes. The cake should start pulling away from the side 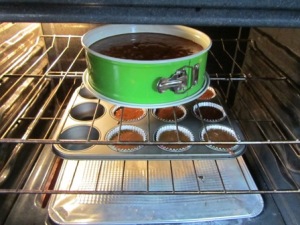 Remove cake from the pan and cool on a wire rack.

Prepare the filling.  You will need a bottle of Kersh, canned or frozen unsweetened cherries, whipping cream, moistening syrup and dark chocolate. Begin by whipping your whip cream. In a bowl or measuring cup, mix together the Kersh and moistening syrup.  This will be your moistening liquid.  Drain the cherries and have them ready for the filling. 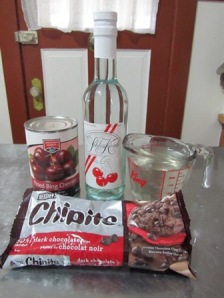 While the whipping cream is whipping, cut out the centers of your cupcakes. You will be filling them with cherries. 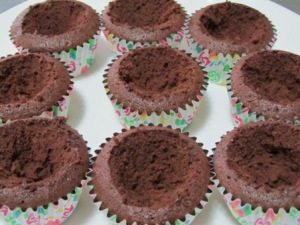 Generously brush the tops with the moistening liquid. 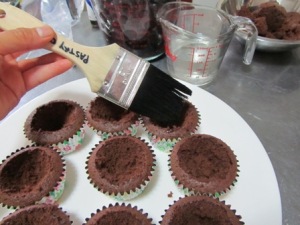 Slice the cake into 3 layers.

For the first layer moisten top of the cake.

Melt the chocolate and mix with 1/3 cup pf whipping cream. 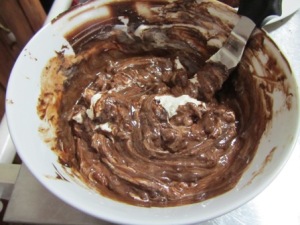 Place cherries in each cupcake. 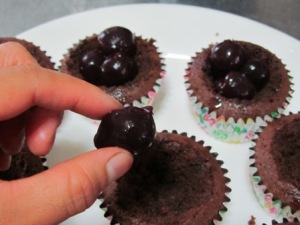 Place chocolate whipping cream on top of the cake. 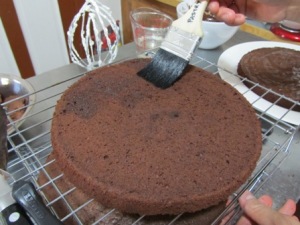 Decorate the cupcakes with cherries. 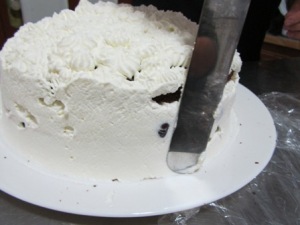 Decorate the cake with cherries and grated chocolate. 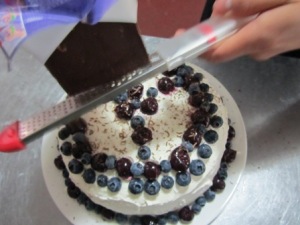 (From Joy of cooking.)

Combine in a sauce pan.  Heat until the sugar has dissolved.  Set aside to cool.

Cut butter into small pieces.  Heat butter on low until melted.  Skim off the foam.  Let stand for a few minutes so the milk solids settle to the bottom.  Carefully pour the clear liquid in a heatproof container.

Have all ingredients at room temperature.  Preheat oven to 350 degrees F.  Grease and flour one 9 inch springform pan.

Sift together the cake flour, cocoa powder and 1/4 cup sugar.  In a sauce pan melt 1/3 cup clarified butter and set aside.

In a heat proof bowl whisk together the 6 eggs and 3/4 cup sugar. Set the bowl in a skillet of barely simmering water (or double boiler).  Whisk until the mixture is about 110 degrees F.  Remove the bowl from the heat and beat on high speed until the mixture is lemony in color and has tripled in volume. The eggs should be at the au ruban stage.

In 3 additions, sift the flour mixture over the top and fold in very gently with a rubber spatula. Reheat the butter until it is hot.  Fold about 1  1/2 cups of the egg mixture into the butter until completely incorporated.  Add the vanilla.  Scrape the remaining egg mixture and fold in.  Scrape the batter into the pan and spread evenly.  Bake until the cake begins to pull away from the sides.  About 30 minutes in a spring form. Remove the spring form and let cake cool on a rack.

Cut the cake into 3 layers.