Soon it will be one of my favorite days in the year.  Pi Day on March 14.  I love it because its nerdy and tasty!

This year I will make it tastier with this wacky recipe.  For all of those parents out there, this is a sneaky way to get your kids to eat their veggies for dessert! All you need is 2 zucchinis.

Begin by cooking the zucchini.  Cut into large chunks and place in a sauce pan.  Fill half way with water.  Simmer for about 30 minutes.  Strain and puree in a food processor. 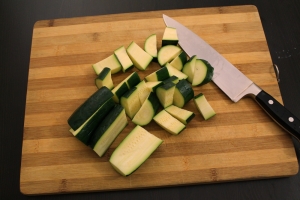 While waiting for the zucchini to cook, make 2 eggs using the egg replacer. 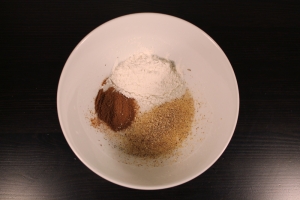 Portion into your pie pans or into mason jars. 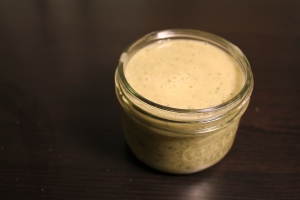 Roll out some puff pastry to top off each mason jar. 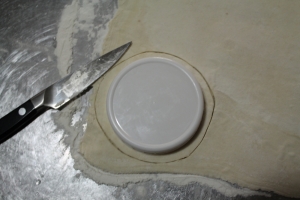 Bake in a 400 degree oven for 25 minutes and then turn the heat down to 350 and continue cooking for about 40-50 minutes.  Prick with a knife to check to see if it is done.  When you pull out the knife, it should come out clean.

Chill and serve cold.  The flavor reminds me of pumpkin pie because it has a lot of cinnamon and nutmeg in it.  There isn’t any noticeable zucchini flavor. The texture is like pudding so this would be nice as well served as a pudding.  If you follow the original recipe in the link the texture will probably be different because of the egg. I didn’t take any pictures of the filling because, well, it looked gross.  Next time I would try adding some fruit or berries to it.

Cut up zucchini into large chunks.  Place in a sauce pan with some water and simmer for about 30 minutes.  Drain and puree in a food processor.  Add the maple syrup, flour, egg replacer and spices. Mix well.  Add soya milk. Pour into your pie shells, mason jars or pie pans.  Roll out your puff pastry.  Cut out discs to cover the tops of the mason jars.  Alternatively you can use a regular pie shell.  Bake at 400 degrees for 25 minutes and then turn down the heat to 350 degrees and bake for another 40-50 minutes.  Allow to chill and serve cold.  You wouldn’t even notice that it is made from zucchini (but the appearance is kind of gross).  Next time I would add some fruit or berries in the pie and use this as a base.

check out of other recipes!  https://eatitnoworeatitlater.com/recipes-list/