Everyone knows how much I love themed parties and cupcakes. Cupcakes make amazing desserts because of their variety in taste and versatility in decorations. These cupcakes were inspired by a Disney themed party I attended. I made red velvet cupcakes with cream cheese frosting. To top it off, Mickey inspired decorations!!

Decorating cupcakes uses a lot of creativity. You first have to come up with a theme or idea and then figure out what to use to create it. To make life simple, use items that you can easily manipulate like soft candies and fruit roll-ups. You can also learn how to make things out of fondant if you feel adventurous. I’ve decided to go the easy route and use candies I could buy from the store.

To make your own Mickey toppers, start by buying some chocolate wafers. Cadbury sells them in bags as buttons. You can also sometimes find them in the bulk section of your super market.

I found the wafers to be a bit on the dull side when I opened the package. They didn’t have the look I wanted so I decided to put them on a baking tray lined with parchment paper so I could heat them up in the oven. I was hoping to get the chocolate smooth with a glossy coating. 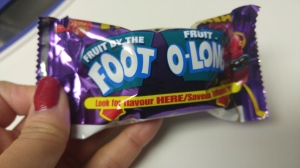 Before prepping the chocolate, I decided to make Mickey’s “pants”. This way when the chocolate was melted, I could place the “pants” on without having to use additional melted chocolate to hold them in place. To make the pants I needed something red. I scoured the store and found strawberry fruit roll-ups! These would be perfect since they were already thin enough to cut and in the colour I needed. Alternatively you could get red soft candy and roll it out before cutting (Starburst works well!).  Taking a large icing tip, cut half-moon shapes. Make enough to cover all your cupcakes. 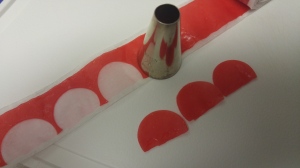 Place your chocolate in the oven making sure it is pre-heated to “keep warm” or on the lowest setting. You don’t want the chocolate to melt too much since you want to keep the shape. Just when the chocolate melts take it out of the oven. 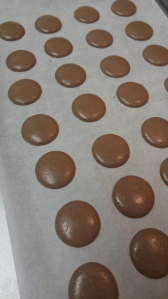 You have some time before the chocolate hardens but you still want to work quick enough that it doesn’t solidify before you place the pants on.

Let the chocolate cool. This will the longest part of decorating. To speed up the process, you can place the chocolate in the fridge for a short period of time until the chocolate just hardens. You can tell when it is ready when it comes off the parchment easily.

In the meantime, ice your cupcakes with the cream cheese frosting. I kept it white to give the cupcake a bit of a contrast to the Mickey topper. 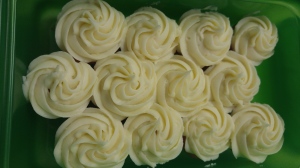 On each cupcake, place one of the bodies slightly off centred making sure there is enough room for the ears. For the ear, I found these candies made my Hersey’s. I’ve also used malt balls as well. 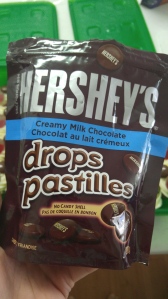 The final touch is to create the white buttons on the pants. I put some white chocolate chips in a ziplock bag and heated it in the microwave until it was melted. Then I cut the tip to create my own piping bag. 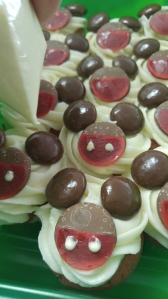 I thought I would be ok with the white marks but I wasn’t so I decided to see if I could fix them before I went to the party. I looked online and didn’t find too much other than reheating your chocolate. So I attempted the only thing I could think of and that was to rub a bit of oil onto them. 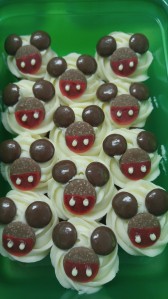 That seemed to work pretty well and you wouldn’t have known that it was white.

These were a hit at the party and so much fun to make!! Enjoy!

For more recipe ideas check out our recipe list.