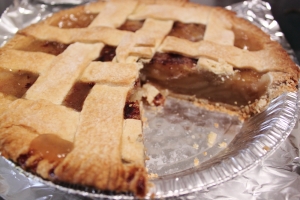 Of course like myself, I never know what pie to make or have ingredients handy.  So if you are in a jam and if you want some apple pie but have no apples try making fake apple pie!!

The best part of this recipe is the simplicity of the ingredients.  Crackers, cream of tartar, sugar, cinnamon and a pie crust.  The first time I made this recipe, we were making themed dinners at my house.  My theme for that dinner was Science.  I had green eggs, fizzy drinks, a cabbage juice indicator centre piece and of course for dessert fake apple pie. 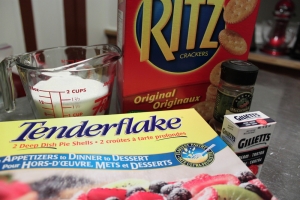 You probably won’t believe me if I said it tastes like apples, but it does.  I even made this pie for a family dinner and didn’t tell them it wasn’t apple pie.  My family was convinced that it had apples until I told them otherwise.  From then on, my cousins always asked what was in my baking. 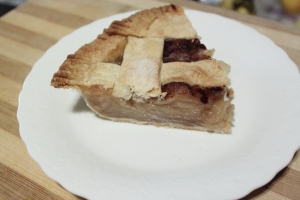 To start the pie, boil the water and add the sugar and cream of tartar until melted.  Once dissolved add the crackers.  I push them down a bit to get them wet.

The crackers will grow when the water boils.  At first we thought there wasn’t enough crackers but they expanded quite a lot. 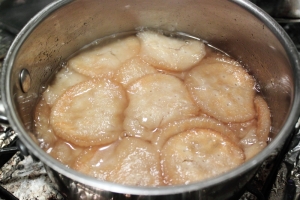 To make frozen pie crust look less like pre-made crust, take one pie crust and slice it up.  Layer the strips to look like basket weave.

Lightly sprinkle some cinnamon on the bottom of the other pie crust and carefully pour the cracker mixture in. 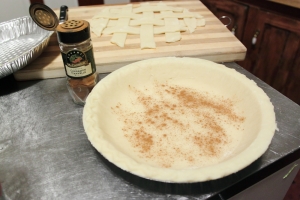 Sprinkle with cinnamon and dot with butter. 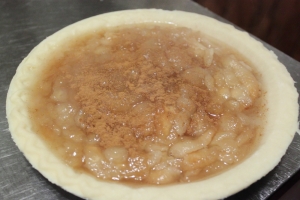 Add the strips of pie crust and weave it back and forth.  To honour Pi day, we added π.  We also used a fork and pressed the tines along the edge.

Bake it in the oven and remember to cover it with foil so it doesn’t burn.

I thought I would make a second pie for my coworkers since they were celebrating Pi day by bringing pies to share but then I thought “my coworkers are going to bringing delicious REAL pies, instead I would bring FAKE buttery cracker, sugar and water pie”.  Maybe next time guys… maybe next time.

Try it yourself even if its just for laughs.  You’ll fool your tongue into believing your eating apple pie.