It is always nice to know a few basic recipes that you can quickly make on the fly.  Basic recipes are great for beginners and seasoned chefs.  Once you know a basic recipe you can then start making variations of it to spice up your menu.  Gravy and meatloaf is an easy dish that anyone can make.  I made a side dish of quinoa to accompany the meal.  I guess I didn’t have much greens on my plate.  Good thing for green smoothies!

Meatloaf can easily be made the day before and reheated or frozen for later.  I like preparing the meatloaf the day before and baking it the day I eat it.  It does take quite some time for the meatloaf to cook through, so plan ahead.  First start off by chopping all your veggies. Mix it with the ground meat, egg, spices, pepper, salt and Worchester sauce.   For the basic recipe I always use carrot, mushroom, onion, celery, and garlic.  You can make variations by adding frozen peas and corn or other vegetables.

I usually use a mixture of pork and beef for my recipe but I have also mixed in ground turkey, chicken, sausage meat and lamb.  I always add a bit of pork to any recipe as there is higher fat content and keeps the meat moist.  You can also add olive oil to the recipe if you are using lean meat.

You can bake your meatloaf in various vessels.  The classic is in a loaf pan.  I have also baked them in muffin tins and topped them with mashed potatoes to make them look like cupcakes.  Here I am using peppers.  Cut the top of the peppers off and remove the seeds.  (I chopped the pepper tops and added them to the meatloaf mixture). 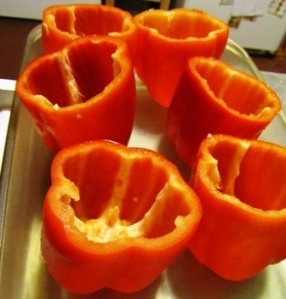 Stuff each pepper to the max!  If you added veggies to the mixture, make sure each pepper has a bit of each vegetable.  You can top off the peppers with ketchup.  The ketchup will thicken up and give the meatloaf a nice crust.  When I made this recipe I wanted whole stuffed peppers but it took way too long to cook.  After about an hour, I checked to see if the peppers were cooked.  They weren’t.  I had to cut each pepper in half. 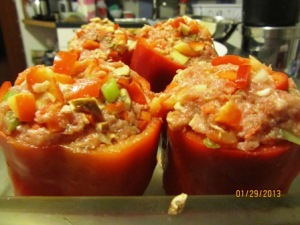 While the peppers were baking, I started my gravy.  Melt the butter in a sauce pan.

Add flour and stir.  This is a rue (or roux).  The rue can be used to thicken sauces such as a cheese sauce for mac and cheese (yum) or making a white sauce such as an Alfredo sauce.

The more flour you add the thicker your gravy will be.  I like my gravy quite thick. 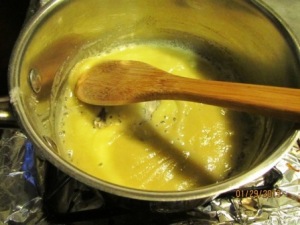 Keep stirring the rue until you get the color you want.  If you are making a light rue, you can start adding liquid when the rue becomes a golden brown.  If you are making a dark rue, keep stirring until the mixture gets darker but be careful not to burn it.  The darker the rue, the nuttier to flavor.  In the picture above I made a golden brown rue.

When the rue reaches the desired darkness remove the sauce pan from the heat and add liquid a little at a time.  It is recommended that you use a whisk.  At first, the gravy will get really thick as the flour begins to mix with the liquid.  Below you can see that the mixture looks like it is getting lumpy.  Don’t worry, just keep mixing and add a little liquid at a time.  (Remember do not put it on the heat until you mix all the liquid in it or it will cook the flour too quickly and you will get lumpy gravy.) 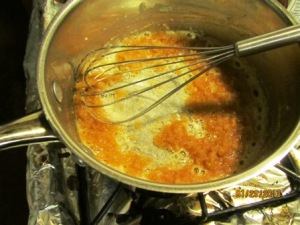 If you are making light gravy (for chicken etc), use chicken broth and make a light rue.  If you are making a dark gravy (for beef etc), use beef stock and darker rue.  For vegetarian gravy, you can use veggie stock (I like the McCormick all vegetable – chicken bouillons) or you can make some with miso broth.

Add about 1/4 – 1/2 cup of broth at a time and make sure that you stir the mixture until it is smooth.  Slowly the mixture will come together.  Be patient.

When you have added enough liquid, you can put the sauce pan back on the heat.  The liquid will not get much thicker after simmering the gravy, so add just enough liquid to your liking.  This is my basic gravy recipe.  To change it up you can add peppercorns or mushrooms.  I am adding mushrooms to mine! 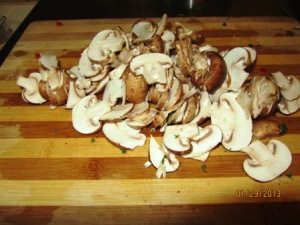 Simmer the gravy with a mushrooms until they are nice and tender. 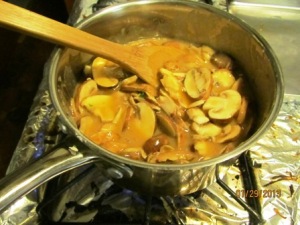 If you used no salt broth like I do, then you need to add some salt.  If you used salted butter or salted broth, taste the broth first before adding more salt. 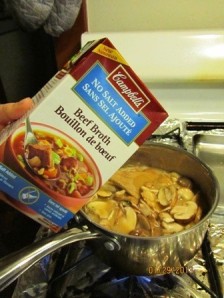 You can serve your meatloaf with hot sauce and ketchup. ( I also included the recipe for making quick quinoa in a rice cooker).

Mix all ingredients together in a bowl.  Cut the tops off of 6 red peppers and stuff.   You can top each pepper with ketchup. Alternatively you can place the meatloaf in a loaf pan. Place in a preheated oven of 400 degrees for 75 minutes until cooked through.

In a sauce pan, melt butter and stir in flour and cook until golden brown.  Remove sauce pan from heat.  Using a whisk, slowly stir in stock a little at a time.  Pour about 1/4 –  1/2 cup at a time and mix well so that you don’t get clumps.  When most of the stock is in the pot use a whisk to mix well.  Put the gravy back on the heat and boil. When the gravy boils add the mushrooms and turn down the heat to a simmer.  Cook until mushrooms are done.  Add salt and pepper to taste.

Quinoa in a rice cooker

2 cups quinoa (rinsed)
chicken broth (or other type of broth)

An easy way to cook quinoa is to use a rice cooker.  In a rice cooker put about 2 cups of washed quinoa (make sure you wash the bitter toxins from it).  Cover the quinoa with liquid of your choice.  Make sure you have about 1/4 inch of liquid above the quinoa. (This is a little less than what you would use for rice).  Press the cook setting for the rice cooker and let the quinoa cook. This takes about 30 minutes.  When the quinoa is done, fluff with a fork.